Article on the Grave of James Hogg in The Sunday Times.

For those readers interested in the current state of the grave of James Hogg, you may want to read the new article in The Sunday Times: "James Hogg's Grave Left 'Desecrated' by Safety Rules" (if you have access to the paper).

If you would like to contribute to the appeal to restore the headstone of James Hogg and other headstones in Ettrick Kirkyard, you can make a donation through the James Hogg Exhibition bank account with the Bank of Scotland. The name of the account is 'Friends of Ettrick School', the sort Code is 80-18-66 and the account number is 06001256. Or you can contact Vicky Davidson, the Coordinator of the Ettrick and Yarrow Community Development Company at vicky@ettrickandyarrow.org.uk.

Any sum, however, small, would be incredibly helpful.

As the Blog post on 5 July 2020 reported, James Hogg's gravestone in Ettrick Kirkyard is currently laid flat along with nearly fifty others, because of health and safety concerns. It is estimated that £20,000 is needed to restore the Kirkyard to the state it needs to be in. If you would like to contribute to the Kirkyard restoration, you’ll find details below.

In the meantime, there is good news about the headstone in Warriston Cemetery, Edinburgh that commemorates Hogg’s widow Margaret and two of the couple’s children. Like her husband’s, Margaret’s headstone had been laid flat. Thanks to a contribution from the James Hogg Society, it has now been restored to its original position, despite the pandemic and some terrible weather.

As the Before and After photos show, it now stands ready to withstand the ravages of time for the foreseeable future. 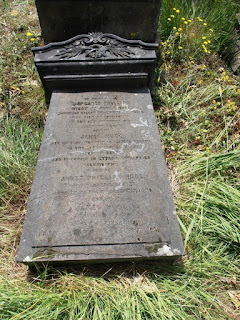 If you would like to contribute to the appeal to restore the headstone of James Hogg and other headstones in Ettrick Kirkyard, you can make a donation through the James Hogg Exhibition bank account with the Bank of Scotland. The name of the account is ‘Friends of Ettrick School’, the sort Code is 80-18-66 and the account number is 06001256. Or you can contact Vicky Davidson, the Coordinator of the Ettrick and Yarrow Community Development Company at vicky@ettrickandyarrow.org.uk

Any sum, however small, would be incredibly helpful, as a belated celebration of Hogg’s 250th anniversary year.

FREE EVENT: The Shepherd and the Shirra: James Hogg and Walter Scott at 250

As one literary anniversary closes, another begins. In an online event sponsored by the National Library of Scotland, award-winning writer James Robertson and cultural critic Valentina Bold are discussing James Hogg, ‘The Ettrick Shepherd’ (1770 – 1835), and Walter Scott, ‘The Great Unknown’ and ‘The Shirra’ (1771 - 1832). Original, innovative and skilled, they were almost exact contemporaries: Borderers at heart, but from very different backgrounds. This event explores the lives and works of these Scottish writers of international significance, and celebrates their distinctive legacies in poetry and prose, from The Private Memoirs and Confessions of a Justified Sinner to the Waverley novels.

For those who missed the event, it can now be viewed on YouTube (hosted by the National Library of Scotland).

A Recent Article on James Hogg on BBC.Com

A recent article has just been published on the importance of James Hogg in helping to form Scottish fiction. Our readers may find it interesting. To access it, click on the link below:

Invitations for Submissions: Studies in Hogg and his World

Studies in Hogg and his World invites submissions for the next double issue of the journal (29-30) which is currently scheduled for publication in the Fall of 2021.

Academic articles, pedagogical papers, or notes on any aspect of the life or writings of James Hogg or his contemporaries are welcome. In terms of pedagogical papers, we are especially interested in how the writings of Hogg are made relevant or significant to students in the contemporary classroom. If you wish to review a book for the journal, please contact the editor, Dr. Holly Faith Nelson (Holly.Nelson@twu.ca). Studies in Hogg and his World is a double-blind peer reviewed journal. Therefore, all articles, pedagogical papers, and notes submitted will undergo the double-blind peer review process. Submissions should be made to Dr. Holly Faith Nelson at Holly.Nelson@twu.ca.

About Studies in Hogg and his World
Studies in Hogg and his World was established in 1990. Its founding editor was Dr. Gillian Hughes, the eminent James Hogg scholar, author of James Hogg: A Life (Oxford University Press, 2007), and editor, co-editor, or associate editor of a great many volumes of Hogg's works for the Stirling / South Carolina Research Edition of the Collected Works of James Hogg. Dr. Hughes edited twenty-one issues of Studies in Hogg in his World before handing over the editorship in 2010 to Dr Hans de Groot (1939-2019), Professor Emeritus of the University of Toronto, the editor of the Stirling / South Carolina edition of James Hogg's Highland Journeys, and author of scholarly articles and book chapters on Hogg's works. With the passing of Dr. de Groot in 2019, the editorship was taken up by Dr Holly Faith Nelson, Professor and Chair of English at Trinity Western University, co-editor, with Dr. Sharon Alker, of James Hogg and the Literary Markeplace: Scottish Romanticism and the Working-Class Author (Ashgate, 2009; Routledge, 2018), and co-author, with Dr Alker, of a series of articles and book chapters on the life and works of James Hogg published over the past two decades.
Advisory Editors

2020 marks the 250th birthday of James Hogg. But when should we raise our glasses of whisky in his honour?

The problem is, we don’t know precisely when he was born. All that’s certain is that according to the parish records he was baptised in Ettrick Parish Church on 9 December 1770. However the records do not include his date of birth.

According to Hogg’s daughter Mary, writing under her married name Mrs Garden, Hogg’s friend Alexander Laidlaw had written to her that on the basis of information from Hogg’s mother Margaret (keep up!) Hogg was born in ‘the latter end of 1770’. Mary Garden assumes from that information a date in November and concludes that 25 November is ‘not unlikely’.

The man himself is no help. For most of his life he maintained that he was born on 25 January 1771, which not entirely coincidentally would have meant that he shared a birthday with Robert Burns. But I’m afraid, to misquote Burns, that fact’s a chiel that most definitely dings.

So should we be getting the socially distanced bunting out this week? Just to complicate matters, Hogg writes in one of the anecdotes about ‘Odd Characters’ in his 1829 collection The Shepherd’s Calendar that, looking back to the beginning of the eighteenth century, ‘as the custom then was, it was decreed that the first Sabbath after [a baby] was born he should be baptized’. Now 9 December was indeed a Sunday  in 1770. So if that was still the practice in Hogg’s day, that might mean he was born between Sunday 2 and Saturday 8 December 1770.

On the other hand perhaps there was a good reason why the baptism of a baby born in November had to be postponed. For instance, though his parents lived just down the road from the church, we are talking about a Borders winter, so perhaps they did not want to take a baby out during bad weather. Or maybe the minister had a cold on the day.

Some wise person, who, unlike the present writer, is not currently banned from crossing their council boundary and entering the Borders, perhaps knows or can find out what the usual interval between birth and baptism was in Hogg’s day; or on which Sundays in November and December 1770 baptisms actually occurred and how they were grouped in the register; or for that matter the weather then. Otherwise the date of Hogg’s birth may always remain a bit of a mystery.

All I can recommend is that we all take the opportunity every day from now till 9 December to raise a glass to his immortal memory. Happy Birthday, James.

PS If you need a reason to keep going for a further week or so, another glass is due for Hogg’s sometime collaborator Ludwig van Beethoven, baptised 17 December 1770 in Bonn and (probably but not certainly) born the previous day.

Students and scholars of James Hogg may be interested in watching the webcast of the informative one-day symposium (James Hogg: Scotland's Shepherd Poet) hosted by the American Folklife Center in February 2020 at the Library of Congress in Washington, DC. This event was co-sponsored by the University of Stirling.

Speakers or performers include the scholars Dr. Adrian Hunter and Dr. Valentina Bold, the film producer Bill Kay, and the singer Sheena Wellington.